It's late. I should be going to bed. But, I realized tonight, that
it's already been a month since my last post, and so many good things are happening. Things I want to remember. Changes I want to share. 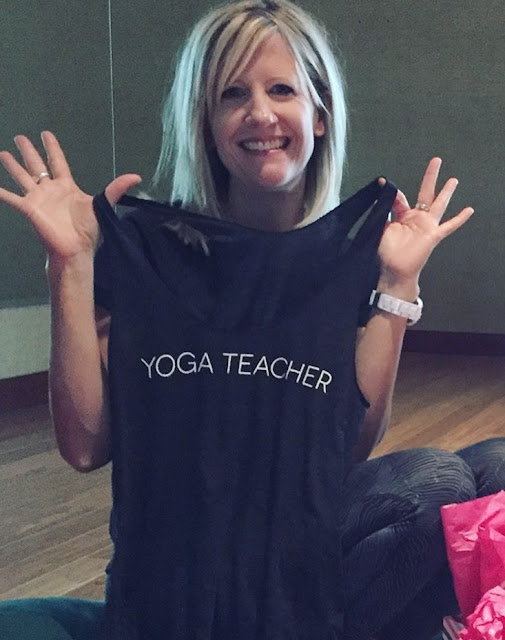 June 8th I became official. And last week, I finished teaching my first six week course.  Oh, and I now have my own website too,  safehavenyoga.com. New classes coming for the new year. When I look back through this past year and a half, I can say that I literally breathed my way through my divorce.  Pranayama baby. And by the way, when is the last time you took a really deep breath?  The kind of breath that fills up every single cell in your lungs. Please do take one of these breaths today, and as you exhale, send out anything emotional or physical that is not serving you. Namaste.

And then there was this.... 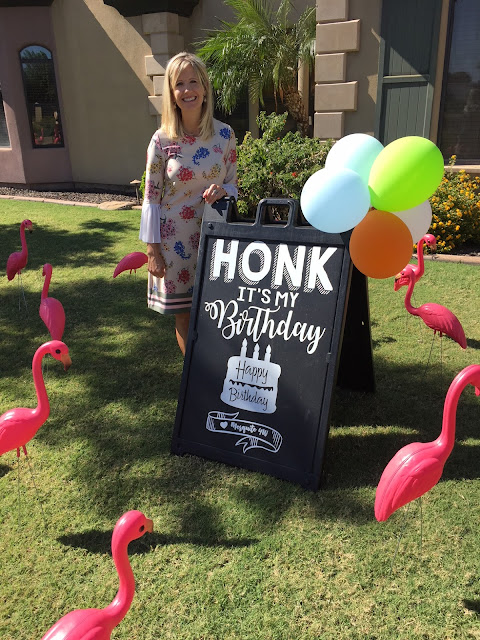 When you have a birthday and a lovely flock of pink flamingos show up in your lawn. (I have the nicest friends)! I remember telling my aunt a couple of years ago, that sometimes I dreaded getting another year older. Her response was, "Well, what's the alternative!?" which  I decided was a very valid point.
My birthday this year was so good.  I can honestly say I have no desire to go back to the earlier days of my life.   There was a lot about those days that was wonderful, but I like me now.  I like who I am.  I like the peace that I've gained that could only come through spending some quality time on this earth. And, I even like my laugh lines, they remind me of how amazing it feels to smile.

And finally this, more progress on what will soon be my new kitchen.... 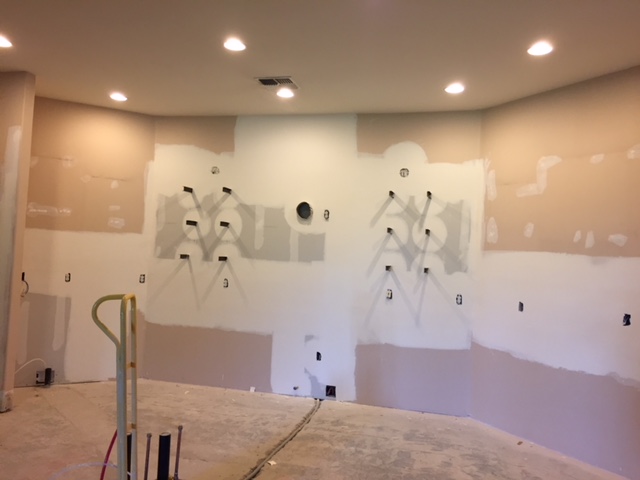 The moving van comes the first week in December.  In our current house we are in full swing packing mode.  As the pictures come off the walls, and the boxes are packed, it's a crazy ride.  One day I can't wait to move into to our new home, and the next I'm a puddle on the floor as I walk through the ten years of memories that were created in this home. I never hold back those tears when they come. They remind me I'm human. They are a sign of progress as I become sensitized again after months of protective numbness.   They are important and vital  for me to continue to heal.  It's such a good thing to embrace each day without emotional resistance. It's also tremendously empowering.

Happy Monday my beautiful readers.
May the changes in your life ultimately be catalysts for good.

Posted by Terra at 9:46 PM No comments:
Email ThisBlogThis!Share to TwitterShare to FacebookShare to Pinterest

As I mentioned yesterday, the food in Seattle was serious delish.  Sierra and her friend Mikayla ended our trip by picking up some macaroons from a store called Lady Yum.  As we headed to the airport, I sampled one. Oh my  goodness, I didn't even know I  liked macaroons until I tried one of these.  When we got to the airport, Mikayla mentioned she'd seen a Lady Yum there when we flew in a few days earlier.  I decided I really needed to buy some macaroons to take home, but then remembered we'd flown into a different terminal (with a different airline) on the way there.  Sad face, but I decided I'd already had enough sugar for the week.  As we walked to our departing gate Sierra remarked, "There's a sister missionary!"  I didn't even see her go by in the crowd, but since she was alone we decided she must be returning home from her mission.  "How great for her family!" I commented and we continued to our gate. I checked the departure time and we grabbed a seat by the window.  That's when it happened. I started thinking about those macaroons, obsessing really.  I needed to take some home (not wanted, needed).  But, I reasoned with myself, The store is not even in this terminal.  You don't have time. I tried to think about something else.  I tried to sort pictures on my phone.  I tried talking to the girls. I tried looking out the window at the beautiful fall day. And yet, there it was, this nagging, relentless thought....must find macaroons. And the counter thought...this is ridiculous, you do not need those macaroons. After another minute or two, I couldn't stand it any more.  I stood up and announced, "I'm going to find that Lady Yum store. I'll be back." The girls looked up from their phones, "Okay?" And away I went, running down the concourse, must have macaroons, must have macaroons.
Now please know, I consider myself to be a person of strong self-discipline. But every once in awhile, something trumps that, like this little situation. I rounded the first hall leading back to the main center of the airport.  This airport is small, maybe the terminals will be connected. I started sprinting past some of the other stores and decided, You really just need to get some directions. The people at the first store where I stopped at had no idea what I was talking about.  Frustrated, I did a 360 turn to decided who I should talk to next.  Surprised, I saw the sister missionary standing by herself against a wall.  I approached her and asked, "Hi sister, are you going home?"  She responded that she was not going home, and in fact had just flown in from Puerto Rico as part of the evacuation of all the mormon missionaries due to the hurricane.  She had been reassigned to Yakama Washington and her flight had been delayed for several hours.  I was shocked.  I asked if I could help, and she asked if she could use my phone to call the mission office and tell them she was delayed so they could arrange a ride for her later that night.  I asked if she had been in contact with her parents, and she said only through email.  I offered to let her text her mom.  She was grateful for the opportunity and I can only imagine (as a missionary mom myself) how happy her mom was to get that text. As we talked some more, she shared with me all the craziness of surviving the hurricane, but also feeling peaceful as the storm battered the house they were staying in for twelve hours solid hours.


Sometimes there are coincidences. But sometimes, things happen for a reason.    I am confident that this strange little macaroon quest was nothing more then a unique prompting that resulted in me having the great privilege of helping this sister missionary.

Yesterday,  our family watched the annual general conference of our church.  I was particularly struck by this talk referencing "divine design" as I thought about how that thought of finding those little cookies was enough to move me out of my seat, and directly toward someone who needed to know that her Heavenly Father was aware of her. As  I listened to this talk by Elder Rasband, I also couldn't help but think of my own life.  It was a sweet assurance to me that my Heavenly Father loves me and is making more of my life through His plan then I could ever make with my own plan.

After texting her mom, Sister Goeff returned with me to my gate and we talked until it was time for the girls and I to board our plane. We exchanged hugs and she took a picture of us together to send to her family.  It's these kind of moments and experiences that make me seriously love my life, no matter what's happened to this point.  My life is so good and God is so good.

And Post Script to this story. In the interim, while Sister Goeff was texting her mom, I did find those blessed macaroons.  The two terminals did connect and Lady Yum was less then 400 feet from where I first saw this sweet sister missionary.  I know, cool, right?!