I have a lot  of things I could be doing right now.  The kitchen is a mess, it's trash day tomorrow and I haven't taken it out yet, and then there's laundry and paper work. You know this list.  So often I find myself assessing the day based on how much I checked off on that infamous list. But a lot of those things, when I reflect back on this day in the future, simply won't matter. I'm confident that in five years I'm not going to look back and say, "I remember it well, September 28th, 2017, I did three loads of laundry and  took out the trash".  These things are necessary, but so empty when I think of what's important to me in this life. I've missed blogging.  Often I  don't write simply because there's just too much to say and I don't have the energy to say it. My divorce has taken over fifteen months, and I'm still trying to pick of the pieces of me. I feel confident that they are all there, but they are scattered and shifted, and in need of a new configuration.
I'm in a strange place right now.  It's a foreign limbo with all of it's inherent uncertainty and unsettledness.  I'm trying to be okay in this space.  I'm trying to be present in each moment instead of boarding the emotional hamster wheel.  I've spent far too much time on that wheel, and I've grown quite tired of it.
As I mentioned in my last post, there are lots of changes going on.  For starters, two weeks ago, I bought a new house. It's new to me at least.  When the girls and I walked through it for the first time, and after just twenty minutes, I turned to my realtor and said, "This is where we're supposed to be".  I felt it in my heart. I felt it in my bones.  My spirit just knew, it was time for a change and this new home was the change I'd been praying for. What followed can only be described as a miracle. As my divorce dragged on, I had to ask the sellers for an extension on my contract four different times.   Four times. And all four times, the sellers graciously agreed. My realtor kept commenting, "This never happens."
So, this is my new adventure.  Or one of them at least.  The bones of the new house were amazing, but I wanted to make it  my own.  Two weeks ago we started demo, gutting the kitchen and family room. The gutting was healing, watching that first swing of the hammer and shattering of plaster, ripping out drywall and jackhammering tile.  So much dust and visual obscurity because of it, and yet the next day, a new space had been created.  So, here's to new spaces and new adventures.  I hope to document the next phase in this journey. This was my kitchen last week. 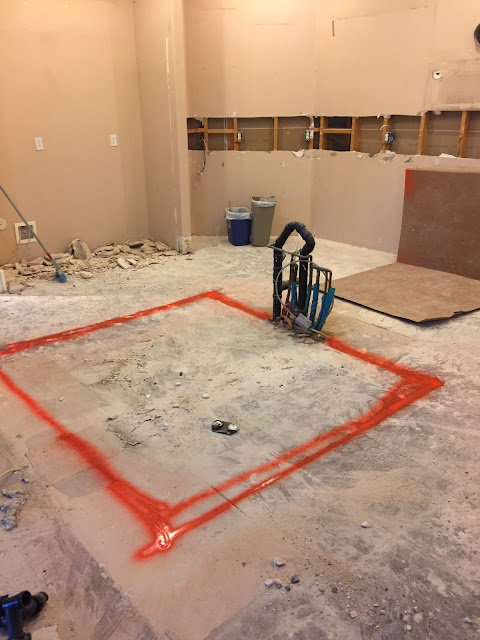 Rough right now, I know.  But stay tuned.
Construction and building and growth and good things to come.
Not just for my kitchen.
Posted by Terra at 7:08 PM
Email ThisBlogThis!Share to TwitterShare to FacebookShare to Pinterest