the hardest thing i've ever done

As I type this, Gregg and I are driving down a seemingly never-ending highway known as the Arizona Strip.  A long stretch of road surrounded by red dirt and sage brush, blue skies from one end of the horizon to the other, interrupted by little puffed clouds now and then. It’s beautiful and gives my hurting heart hope.
Yesterday I woke up and thought,
This is it. This is the day I say goodbye to my daughter for eighteen months.
As I rolled out of bed and onto my knees, I poured out my heart to my Heavenly Father.  I told Him how hard this was, and how much I knew it was going to hurt.  I also told Him that I knew, without a doubt, that if He would help me, I could do it.  Then I prayed for Sadie to have strength and peace and joy in this journey.  Then I prayed for Madisen and her family, and I prayed for her flight to go well, without delays or problems.  When I got to this part, I suddenly felt very uneasy.  I finished my prayer, but continued thinking about Madisen.
About two hours later Gregg got a phone call from Madisen’s mom.  He came downstairs to give Sadie and I the news…Madisen had missed her six a.m. flight. She would have to be rescheduled for a later flight. Sadie and I looked at each other and I knew we were both thinking the same thing.
How are we going to do this without her?  She was our sweet blessing to make this drop off thing possible. We were going to be there for her when her family couldn’t. Why had this happened???
I have been around long enough to know that God’s plan for us is often full of a whole bunch of twists, turns, and detours that we’d rather not take.  I’ve also learned that trusting His plan and having faith usually works out better for me.  So, I put on my brave mom face, and said,
It’ll be okay. And Madisen will be okay.
It took everything I had hold back my tears the rest of the morning, but I knew I had to for Sadie’s sake.  She packed and repacked one more time.  We convinced her to go to lunch even though she said she wasn’t hungry.  She managed to eat a pastrami on rye from jason’s deli, and as we drove back to pick up her luggage, we were hit with an emotional sight.  As Sadie glanced into the lane next to us, she noticed another family in a truck. The dad was in the driver seat and next to him was  a young man looking very nervous. He was about Sadie’s age, and wearing a suit and tie. Sadie commented,
I bet he’s checking into the MTC too!
The truck pulled ahead of us and as we turned left, the other dad turned right and we watched as his brake lights flashed and he slowed and signaled to turn into the MTC.  At this point, Sadie was one hour from her check-in time and neither one of us could stand the anticipation for another second. And suddenly, we both erupted with this kind of teenage scream/ yell thing,
Oh my gosh!  Oh my gosh!!!! Oh my gosh!!!!!!!!!!
Me…
Sadie, you’re going on a mission!!!!
Sadie…
Ahhhh!!!!! I’m really doing it!!!!!!!
This little release was just what we needed to get us through to 1:03 p.m.  And then it was time. Sadie gave her aunt we’d been staying with a kiss and hug and we climbed into Gregg’s truck for the final ride. It takes less than five minutes to go from where we were staying to the MTC. As we drove out,  I kind of felt like my heart might come out of my chest as I tried to remember to breathe. I kept thinking “I wish Madisen and Sadie were going in together. Maybe just thinking they would be was the blessing we needed to get to this point.” And then, one second later, Sadie said,
I think just believing Madisen would be with us was what I needed to keep me sane this week.
Yep, goosebumps for me.
Then Sadie started to say,
I just want you to know how much I love you both...
and then broke off.
Gregg came to the rescue,
We know babe!  We love you. We’re so proud of you!
And then I said,
There’s a whole lot I want to say right now, but I hope you already know it, and if I do, I’ll cry.
At this point we are almost there and I am about having an anxiety attack but don’t want Sadie to know.  So, I roll down my window and take in as much fresh air as I can get.  And then, as we’re turning into the MTC  Sadie says,
Roll up your window Mom!
And then she does one more of those “I think I’m going to blow up!” screams and then we are all laughing and crying at the same time.
There’s a man directing traffic at the gate. He gives Gregg a few instructions, and then says with a very kind smile, “Good luck mom!”   As we pulled around the corner to the “drop off”, there are little stations with numbers all along the curb, at least thirty.  The car in front of us pulls away and we pull into station number one.  All of the stations are “hosted” by an elder or sister missionary who helps the incoming missionary get situated.  Usually it’s missionary who is going on a foreign mission (and is spending at least a couple of weeks in the MTC).  So, we hop out of the truck and are greeted by this cutest sister missionary (leaving for Sweden on Monday) who announces to me,
Okay Mom, first you have to give me a hug! 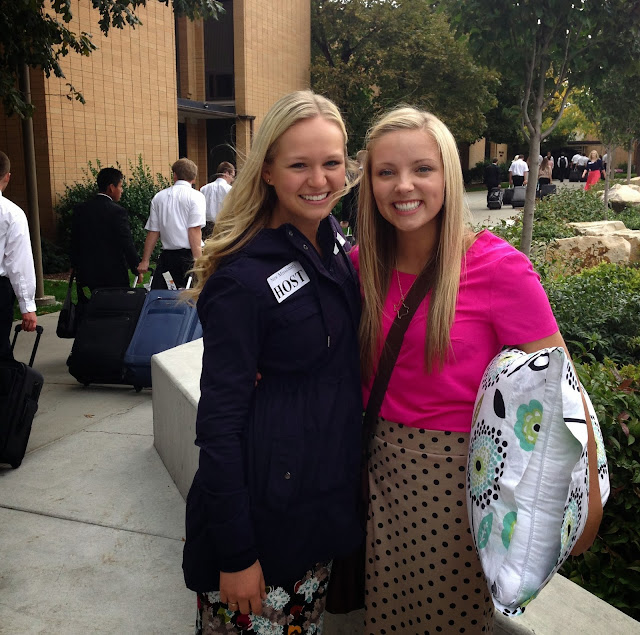 So I started laughing and crying even harder and happily give her one. Then these three elder missionaries come over and help Gregg unload Sadie’s luggage. And then, it was really, really time. 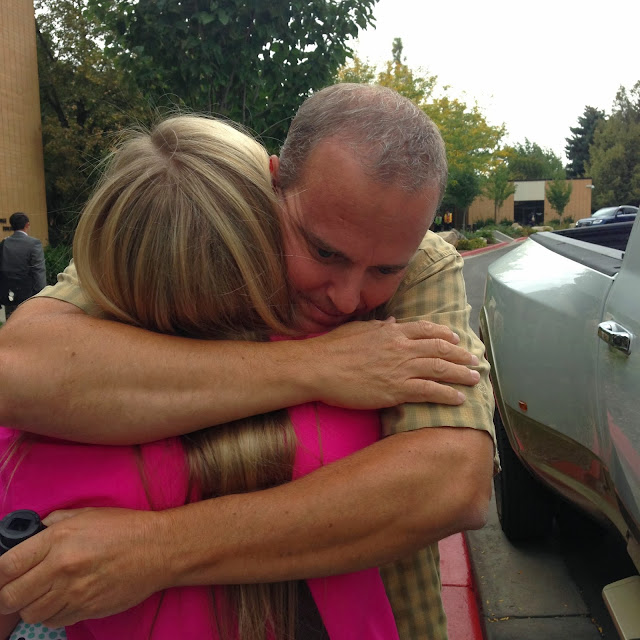 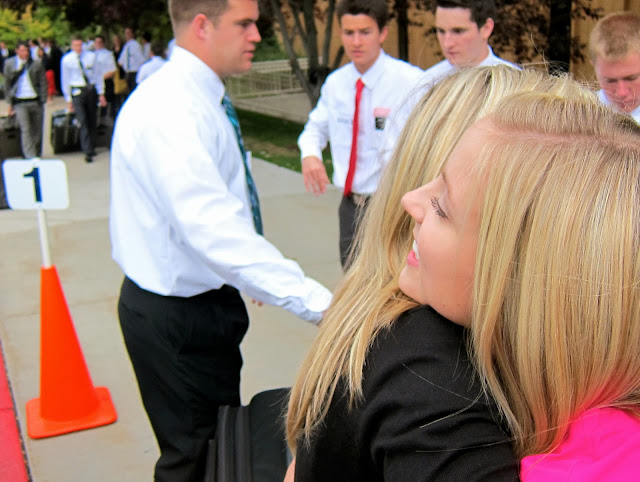 So we hugged and kissed our daughter and smiled and cried as we watched her walk away into the next adventure of her life. 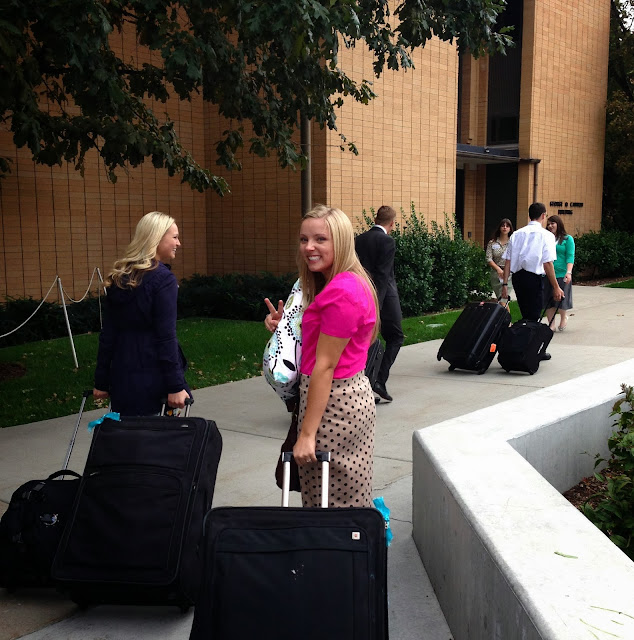 And she was so happy.
And as Gregg and I drove away I almost jumped out of our truck to run back and give her one last hug. But I didn’t. I knew it would be too hard for both of us.  And remember, I promised to send her off with a smile.
And I did.
Posted by Terra at 9:37 AM
Email ThisBlogThis!Share to TwitterShare to FacebookShare to Pinterest